Cheating is a lot more common than anyone in a committed relationship cares to think about. Everyone who cheats has his or her own reasons, but these are the most common reasons in no particular order. It’s easy to tell someone to leave the relationship rather than cheat, however it’s not always that simple. If you find yourself being the cheater, determine why you’re cheating and do what you have to do to fix what’s wrong within you if you want to stop that behavior. If you’re the one being cheated on you can choose to try to work it out, or leave the situation. Only you know what’s right for you.

Someone who is unhappy in a relationship is more likely to cheat than someone who is happy. The reasons for being unhappy could include a stale sex life, the partners growing apart, being overburdened with life’s obligations, amongst many more. The nature of the affair will differ depending on the reason the cheater is unhappy. For example, if he’s not getting enough sex or if he’s not stimulated by it, he’ll have a physical affair or a string of one night stands just for the sex. If he doesn’t feel valued or loved, he might have an all-out emotional affair which could include sex or might remain purely emotional. If he’s unhappy because of the stresses at home, such as the job, bills, kids, and other obligations, he might have a string of one-night stands to relieve that stress or find someone to confide in. If you see a change in your partner, try to understand why he’s not happy and come up with some things to try together if you’re both interested in saving the relationship.

A person who has been cheated on or treated poorly may have issues trusting their partner. In turn, they cheat because they can’t give themselves completely to anyone out of fear of being hurt. The saying “there’s nothing like a woman scorned” can apply here. Sharon was in a 14-year relationship where her partner cheated on her and constantly reminded her that she would never get better than him. After finally realizing the relationship was not good for her and leaving, she wasn’t faithful to the string of men she entered into relationships with because she assumed they’d cheat, too. Instead of giving herself to the relationships completely and trusting any of them, she went through the motions all the while looking for the next guy. This behavior isn’t fair to the cheater or her partners. There’s always a risk when you trust someone else because you can only control yourself, but you’ll never have a fulfilling relationship with yourself or anyone else if you won’t allow yourself to trust.

Some people stay in a relationship they’re unhappy with because they feel obligated. He might feel bad because he doesn’t want to leave his kids, because of religious convictions, or perhaps he knows she can’t financially take care of herself without him. In this case, he knows he doesn’t want to be in the relationship any longer but doesn’t feel right about leaving the situation. At this point, he’ll have to come to the realization that the only fair thing to do, for both of them, is to separate. Neither of them will be happy if he’s cheating and they’ll both figure out a way to make things work on their own.

A person might be more likely to cheat if she’s bored in her current relationship. When things get stale, some people search for stimulation wherever they can find it. It’s important to have routines, however trying new things together can prevent this issue. Take turns coming up with ideas, in the bedroom and out of the bedroom. Sometimes breaking the routine can add excitement. In the bedroom you can introduce outside stimulants, such as movies, new toys, or simply role play to act out both of your fantasies.

Someone who is insecure might cheat to try to find validation, not realizing it can only come from within. This cheater may appear to be one of the most confident people you’ve ever met, when in reality he needs to be constantly reminded that others find him appealing and worthy. He’ll never be complete no matter how many women he beds because what he actually needs is confirmation and love within himself. He allows the company of others to stroke his ego, however this is only a temporary fix and he soon finds that he needs more and more attention from the opposite sex. Until he loves himself, he won’t slow down because he may not know how.

Ultimately, any cheater has her own very specific reason for cheating, even if she doesn’t realize it. It’s important to take the time to truly get to your know yourself before entering into a relationship with someone else in any capacity. If you find yourself being the one who’s being cheated on, you can try to stay and work through it with your partner or you can choose to leave. Keep in mind, there is no guarantee it won’t happen again and your partner will have to truly want to change her behavior. Open and honest communication is the key to moving forward.

Ask Cindy: Why Is It That Cheaters Prosper?
Divorce Stories We Tell
My Husbands Emotional Affair: The Pain Endure...

Do you want weekly motivation to guide you as you rebuild your life during or after a divorce? Sign up for your free weekly Coping with Divorce Newsletter

Ask Cindy: Why Is It That Cheaters Prosper?

I was married for 39 years not all good, lots of rows, occasional physical abuse and mental abuse. [...]

Ask Cindy: How Can I Overcome My Grief and Feel Free?

My marriage of 15 years fell apart two years ago and I'm finding it hard to get over the hurt, anger[...]

Ask Cindy: Where Is His Justice?

I thought my ex husband would have bad karma because he cheated on me with my best friend of 23 year[...]

Being at Peace With the Emotional Turmoil Inside

Divorce is never easy. Regardless of how bad the marriage was, or who left whom you are left with em[...]

Why am I Thinking about My Ex-Husband All of the Time?

Do you find that you spend a majority of your time thinking about your ex and wonder, "Why am I thin[...] 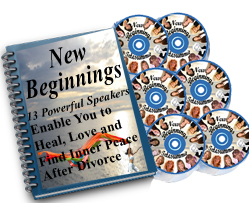